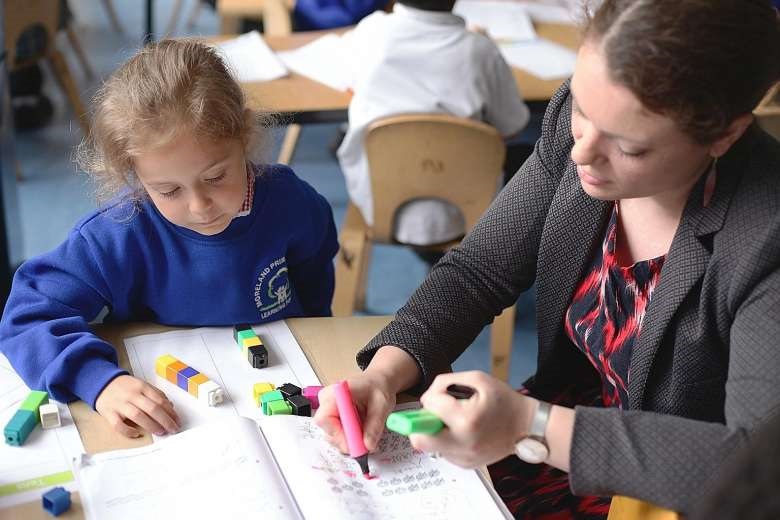 The "mastery" method, as Singapore's approach is called in Britain, introduces core concepts gradually. Ideas are broken down into small steps, using real-life objects such as cubes to illustrate a point, before moving on to drawings and then concepts.PHOTO: OXFORD UNIVERSITY PRESS

The Singapore style of teaching mathematics is already being used in thousands of schools across the United States. Now, it is making inroads into British schools as well.

The Inspire Maths series of textbooks, adapted from the books here, were trialled in 70 British primary schools by the Department for Education over the past two years.

A study found that they were effective in helping children master the subject better.

Now, with another £41 million (S$72 million) from the British government - to fund a network of "mastery specialist teachers" - the Singapore style of teaching maths may reach as many as 8,000 primary schools in Britain over the next few years.

The Inspire Maths series published by Oxford University Press was adapted from the My Pals Are Here! textbooks published by Marshall Cavendish Education for schools here.

Researchers found that pupils shot ahead of their peers when taught the Singapore way, which focuses on mastering core principles as "building blocks".

The "mastery" method, as Singapore's approach is called in Britain, introduces core concepts such as times tables, addition and subtraction gradually, until learners are confident. Ideas are broken down into small steps, using real-life objects such as cubes and beads to illustrate a point, before moving on to drawings and then concepts.

The research combined child assessments with classroom observations and interviews with teachers.

Teachers reported that the programme could boost children's motivation and engagement, and the evaluation found that it could be used creatively and flexibly.

Researchers also found that teachers value the professional development provided to support their use of the Inspire Maths resources.

Professor James Hall, lead author of the study and now a lecturer at the University of Exeter, said: "This boost to progress was surprising because pupils had been in a classroom setting for only a short period and because it often takes time to embed new teaching approaches."

The study involved two groups of children aged five to six - a total of 550 - learning maths in 12 English schools in 2015 to last year.

The first group learnt maths the normal British way for the first term, then switched to using the Inspire Maths textbook in the second term. The second group used the textbook for both terms, and made better overall progress than the first group.

But, she said, Singapore maths cannot be a "quick fix".

First, the pressure on schools in England to cover a large number of maths topics in the national curriculum each year creates tension with the Singapore maths approach, which emphasises building solid foundations before moving on.

She added that teachers need more professional development and that school management teams need to be brought on board.

Marshall Cavendish Education's head of publishing Lee Fei Chen said: "We are excited about this research and that it demonstrates the effectiveness of a mastery method of teaching mathematics in UK classrooms that has been so successful in Singapore."

The Singapore style of teaching maths has gained attention because of the Republic's high placings in global benchmarking tests.

Singapore students were ranked No. 1 in maths, science and reading in the 2015 Programme for International Student Assessment test results released in December last year. Britain was ranked 27th in maths.

Besides Britain and the US, 15 countries - including South Africa, Brunei and the Netherlands - are using customised textbooks based on Singapore maths produced by Marshall Cavendish Education.

Prime Minister Lee Hsien Loong on Thursday (April 6) shared this article on his Facebook page and said he was "glad that our methods are helping children in other countries learn and do better in maths".